A lot of different places have computers with controls on them for several things; some have controls for installing software, some for running software, blocking websites, opening certain file formats, etc.

Obviously, not all places use the same methods, and not all of the methods I mention in this article will work on every computer or operating system. Remember that these controls are probably there for a reason, so if you do discover ways to bypass them, then don't attempt to cause (too many) problems or tell anybody how to bypass the restrictions if they might attempt to cause problems.

If you are caught attempting to get past the security measures, even if you don't manage or you're doing it for a good reason, then you may still get in trouble, so be careful.

If your workplace or school uses software to restrict a lot of things, then the first thing to try is the Task Manager process list. If task manager can't be opened with the Ctrl-Alt-Delete shortcut, then you may want to try the Ctrl-Shift-Escape shortcut. In some cases, this can be used to annoy your friends, as it can open hundreds of error messages in a few seconds if this shortcut is blocked. Of course, nobody on here would ever want to do anything like that because it would be wrong...

There are other ways of opening Task Manager or similar tools. The blocked computers in my school blocked both task manager shortcuts as well as installing or running new software, but they left Microsoft Access installed with full Visual Basic for Applications functionality, and many places on the Internet have codes for creating your own task manager or process list. Of course this could also be used for more sinister things, using code from Google, but again, nobody here would ever do anything that's not allowed...

One way of opening a lot of blocked file formats or viewing blocked websites is by remotely controlling another machine that doesn't have these restrictions. I used TeamViewer because that is what I am experienced with and it was accessible in many ways; you can install it on removable media, run it without installation on computers that stop you installing new software, or you can even use it through a web browser if you can't run .exe files.

This is probably the easiest security measure to get around. The easiest way is to use a circumventor like stupidcensorship.com, although these are often blocked quite quickly as well, so I recommend signing up to their mailing list to receive emails whenever a new circumventing site is created. If they're being blocked too quickly, then you can set up your own circumventor; follow this guide to make one.

You may also want to check that the sites aren't blocked locally. This is a method of blocking that is less common in schools and workplaces now, but still exists. Check this by going into your browser's "tools" section or its equivalent on whatever browser you use, click on security or a similar section and look for a restricted or blocked sites section, then view these sites and remove any you want to access if they're there.

You could also try accessing the blocked website using its IP address, you find this by opening the command prompt on any Windows computer (by typing cmd in the run box) and typing:

For example, if I wanted to find the IP address for Facebook, I would type:

This would be the result: 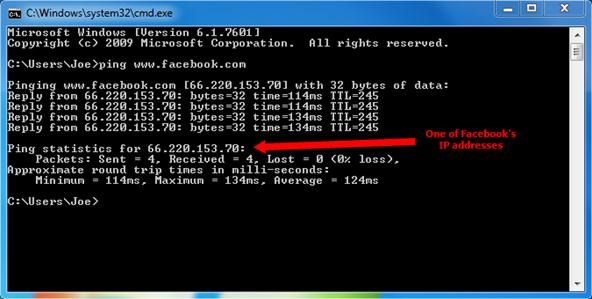 If you didn't have access to the command prompt, then a lot of sites' IP addresses can be found with Google or this website. To access the site using the IP address, you just type it into the address bar instead of the web address.

I personally don't know many ways around this one other than to try and find an admin password. Safe mode works occasionally.

There are several ways to find admin passwords, often the default passwords will still work, or you can use a password cracker like Ophcrack to find local admin passwords (check out my last how-to guide for Ophcrack). If you have access to the command prompt on a Windows computer, then you can use the "Net user" and "Net Group" commands to find out details on each account, and if you know enough about command prompts, you may even be able to change the passwords.

Sometimes you can boot Windows in safe mode by pressing F8 as Windows boots and trying to install the software then. Safe mode is a good way to bypass a lot of security software and restrictions. For example, my school had an "RM Login" screen that I could only skip by using safe mode.

This is normally much easier than installing new software, because there are lots of ways of doing it, and normally at least one works. One way is to use safe mode like I mentioned in the last section, or if you are good with Visual Basic coding, then you may be able to rewrite simple applications in Visual Basic for applications like I mentioned at the start of this article. You could also use Notepad and make some kind of runnable file. Here is a list of some of the most common runnable formats on Windows:

When I first had to bypass this type of security, I had to use .vbs because the rest had all been blocked.

The third method I have used is booting or running from an external device. I've used USB flash drives, CDs, DVDs and an external hard drive and have booted both Linux and Windows operating systems. Most operating systems can be installed on removable media. Once you've booted from this device, there are often no restrictions at all on the system other than Internet-based ones which force you to connect to the Internet through a proxy server that blocks websites, but like I've said, they're not hard to get around.

Many companies or schools are quite dull and want everybody's accounts to look alike. My school was like this and refused to allow you to change your desktop wallpaper or select a screensaver. However, what they didn't notice was that by selecting the "Windows Classic" theme you could choose to change the colors of every aspect of your system other than the desktop background or screensaver. I think that my class was much more interesting after I had taught everybody how to do this and after one person (not me, I'd never do anything wrong, honest!) changed the boring old IT technician's entire computer, including the text, to bright pink so it stood out from a mile away (slightly ironic, since the technician was the person who decided we all had to have identical desktops).

You can also add a "God Mode" folder on some Windows computers, which gives access to a lot of new settings. You add "God Mode" by making a new folder in the hard drive's root and naming it exactly like this, including the brackets:

There are commands similar to this that will add access to other settings, but I've not used many of them personally, although you're welcome to try. This CNET article has a list of these commands, but doesn't include what they do.

Each blocking system is different and I can't cover everything in this guide. There are probably places where nothing I have mentioned in this guide will work, and each restriction probably can be bypassed in at least one way (normally more). I found a lot of these tricks myself through Google or by playing with the few menus that I could access.

A lot of the things I mention in this article can be used for purposes other than innocently making yourself unique. For example, using the Visual Basic for Applications to wind up friends or run not-so-legal programs (I do not take any responsibility if you do this and get in trouble). I have obviously never done anything that I shouldn't have (I'm an angel), I certainly never used the AppleScript editor, which was for some reason left unblocked to create a fake virus that made my friend mad using the following Applescript code:

if the button returned of the result is "Destroy Virus" then

Say "You can not destroy me"

Of course this "fake virus" could have undesired side effects. I am not responsible for any crying, rage or fists-through-monitors that this may cause, or any trouble that you get in. I was almost excluded (expelled) three days before I left school because somebody I trusted told the IT technician that I created this. (Not that I did, because this is completely hypothetical as I was a model student that never did anything to annoy anybody else).

Very good, the applescript looks fun, I should do that to a few people lol.

I'd never used applescript before and within a month I learned that, shows how much attention I paid in business class lol...

Haha, nice...I am glad your school years were highly productive. :)

Is there anyway to convert this to a windows format for use?

I am taking a 'Computer Security and Network Technology' course at a local com. college, and would like to play a prank on a fellow class mate.

Most of this is for Window's use, if you're talking about the Applescript part then you would have to use a different type of code like visual basic, but I've never done it. Try googling Windows fake virus or looking at visual basic tutorials on wonderhowto.

Thanks, we are in PoweShell now, I will try ad see if I can accomplish it ther.