You walk over to your laptop, wiggle your mouse to wake up the screen, then fire up your browser to come visit Null Byte. Catching the article about Anonymous and how they presumably will not take down the Internet, you find yourself wondering... how would someone take down the Internet? Could they even do it?

The Internet is definitely a cool place, but a lot of people don't understand how it is all connected together. I don't mean how your laptop plugs into your router, but how entire networks like AT&T and Verizon interface with everything else to help make the seemingly effortless transfer of data possible. An understanding on the underlying design of the Internet gives you a MUCH better idea what is going on out there and how certain attacks will and will not work.

A Long Time Ago, In a Government Bunker Far, Far Away...

Like a lot of cool technology around today, the Internet originated from DARPA, the Defense Advanced Research Projects Agency of the United States Military, along with several universities like Standford and Rutgers—or Al Gore, depending on who you ask. Much has changed from its initial template, but its core idea of packet switching remains standard.

The idea that you could take data, break it up into sized blocks that could be sent across lines and wires, and then reconstruct it on the other side in real time was a breakthrough. The various agencies and schools were able to link together their supercomputers of the day, creating the first major packet switched network, named the Advanced Research Projects Agency Network, or just ARPANET. Initially, this new network only connected four major computers at universities in the southwestern U.S. (UCLA, Stanford Research Institute, UCSB, and the University of Utah).

In fact, the image below shows what the "Internet" looked like, in its entirety, back in 1977. 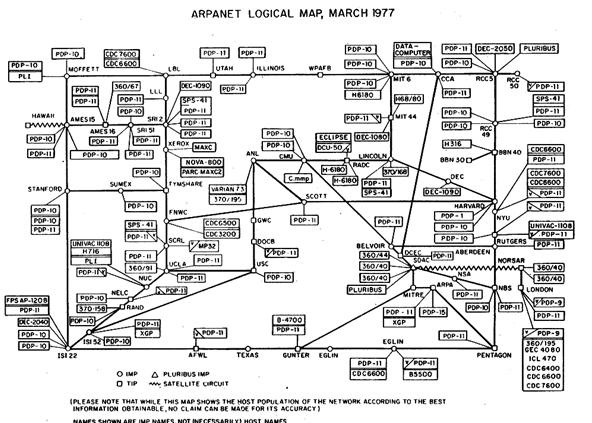 Contrary to popular belief, the goal was not to create a command and control network to survive a nuclear attack, but to fix a scarcity problem. There were very few computers back then, and those that did exist were large and very expensive. ARPANET allowed researchers to access them, who otherwise would not be able to.

It was this act that spurred the research that allowed for the great leaps forward from that point. These early networks were lacking in modern amenities like Facebook and YouTube, but allowed the critical high-speed (for their time, anyway) transfer of data to take place.

In 1974, the first use of the word "Internet" was written about in RFC 675: Specification Of Internet Transmission Control Program. This was the start of TCP/IP. In a nutshell, the problem then was that a common set of languages was needed, so all the computers and networks could talk to each other. It would be akin to having a room full of people from across the world and asking them to play the telephone game. It was adopted by the Defense Department in 1980, replacing the earlier Network Control Protocol (NCP), and universally adopted by 1983.

By the 1980s, other networks had joined together with or split apart from ARPANET, as shown below. 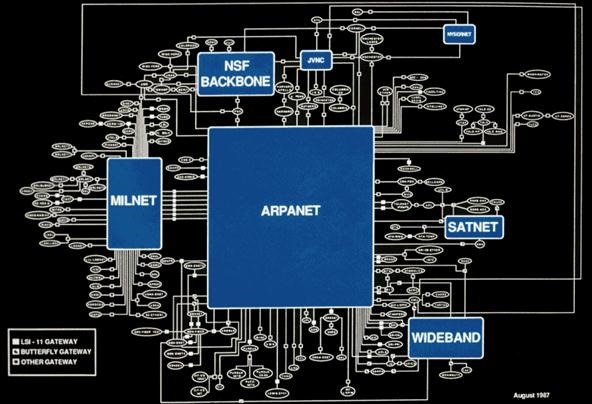 The way to look at this is... envision the entire first image from 1977 fitting into the blue boxed ARPANET in the second image. Everything expanding from it was either a new addition or smaller networks that were pulled out and made their own.

MILNET was for the sharing of unclassified military information and was split off from ARPANET in 1984 to allow for more commercial use of the main network. In the 1990s, this was renamed NIPRNET and is still the U.S. Military's network for handling sensitive, but unclassified information. It is said to be the largest private network currently operating, though exact figures are classified to date. Below is a network diagram of its heyday. 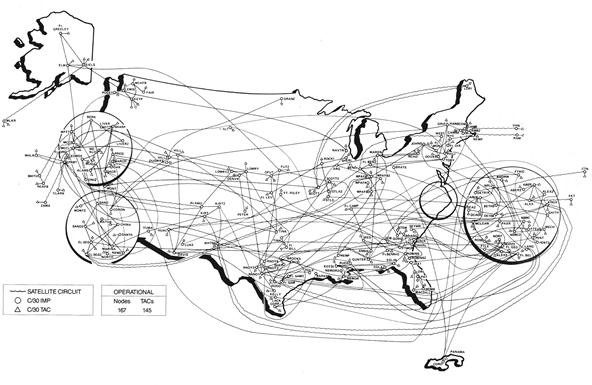 NSF is the National Science Foundation Network and was created back in 1981, expanding ARPANET access to help advanced research and communication among scientists. In 1986, this was expanded to an even larger audience of organizers and researchers. Remembering that supercomputers are expensive, this design was to give access to a range of people across the involved universities and data centers. It grew and grew until its networks became one of the largest backbones of the Internet.

As you can clearly see, the following supercomputers were networked together and this created a permanent high-speed route that other data could also 'ride' on to reach a new destination. This is the basic idea of a backbone and one we will address in far more detail later. 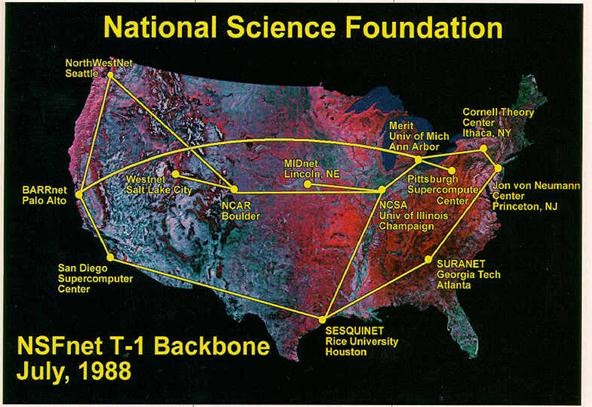 In 1989, another epic event took place that helped shape the Web today. Tim Berners-Lee and others at the European Laboratory for Particle Physics, more popularly known as CERN, proposed a new protocol for information distribution. This protocol, which became the World Wide Web later in 1991, was based on hypertext—a system of embedding links in text to link to other text, which you have been using all day to surf the web, no doubt. Does HTML sound familiar?

The end of the '80s was another turning point for the Internet, as service providers like PSINet and CompuServe sprung onto the scene offering communication and early data services to a wider range of people. ARPANET was eventually decommissioned in 1990, allowing commercial use of the physical networks that remained and ushering in the age of the Internet as we know it today.

Since the Internet was initially funded by the government, it was originally limited to research, education, and of course, government uses. Commercial uses were prohibited unless they directly served the goals of research and education. This policy continued until the early '90s, when independent networks began to grow. It then became possible to route traffic across the country from one commercial site to another without passing through the government-funded backbones.

Also, as a result of decisions made during this time, certain geographic routes and networks became more critical than others and directly influenced the direction the Internet would take in the future. The modern Internet was born.

It's important to know the humble beginnings discussed here, as it will make understanding the big data noodle that is the 'net today, that much more easy.

Do you remember anything from these days of pre-AOL ancient history? Care to share with the community? This is a topic often not talked about, but plenty of people are interested!

Leave us a comment, shoot me a message, or visit our Forum.

I wish I was around for this great time in the History of mankind, but alas I was not. Those were the days where you actually needed to know something about computers to hack them or mess with them now all you need to do is open up google and search and find 100,000s of links to other sites.

I remember a full page ad in a PC mag of the day for a US Robotics 33.6K external modem. I don't remember the price but I remember not being able to afford it. I wanted it soooo bad.

Makes me miss Dialing into local BBS's on my 14.4 to play Majormud on Jungle before they became Dialsoft and later they were my first ISP

Played Realm of Legends on Metropolis BBS myself. Ah, the good 'ole days.

I wish, we will able to make a design which will able to recognize all known TCP/IP and ports. The algorithm will be such, it will examine with diff. service provider's network to check for the listed nodes, if no match found it will be rejected. Once an adapter is enlisted it can't hide in any disguised manner, when online...Not sure but I am imagining , to make an immortal cyber space... Supported totally by machines, no human. So that it won't be breach for lust, greed, threat whatsoever.

I wonder how did they sustain alot of network . Who is behind the deepest level of the dark web?