Amazingly, a lot of people I know haven't even heard of SOPA or PIPA. Now, every English-reading person with an internet connection will finally have those two four-letter acronyms emblazoned in their minds. For the entire day today, Wikipedia's English-language site will be in total blackout in protest against the proposed legislation in the United States. And that's not all. MoveOn, Reddit, BoingBoing, Mozilla, WordPress, TwitPic and other popular websites are down today in protest. 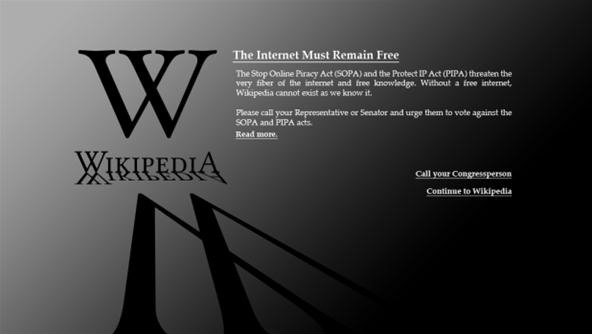 Both the Stop Online Piracy Act and PROTECT IP Act are backed by six Hollywood film studios and four major record companies. The bill's stated goal is to put an end to online piracy, but given their approach, they would effectively give the U.S. government a kill switch for any site on the internet. What's more, the decision to throw that switch would be given to a court at the request of a private company, without the website in question being given a chance to state their case. It's true that piracy is a problem, but this is not the way to solve it.

If these bills get the green light, private companies or individuals could ask a judge to cut off access in the states to any sites they accuse of piracy. Online advertisers, credit card companies, and ISPs could also be forced to cut off ties with any accused pirates. The bills also give immunity to ISPs who voluntarily take action against any accused sites.

I imagine Comcast would have an itchy trigger finger.

Both bills are ambiguously written, opening the possibility for companies to exploit them to take down any websites where people share content with each other. Currently, if a person shares copyrighted material on a website, that website is protected by the DMCA, so long as they take down any infringing material promptly after being notified of an infringement. It is impossible for a website that allows users to post content such as images, videos, or audio files to verify whether or not that content is copyrighted by someone else so this protection has opened the door to every single website you use that allows you to post something to it without delay. SOPA and PIPA would skip this safe harbor, rendering practically every social site vulnerable to attack and without any chance to defend themselves in court.

If these bills pass, one infringement would be enough for a copyright holder to file to take down an entire website. YouTube could disappear overnight. Same with Vimeo, Flickr, Twitter, or even WonderHowTo. Enacting such a draconian law would stifle innovation from new web startups. It would be too risky to create a website where people could submit their own whatever. Even the White House has spoken out about its concerns, emphasizing that they "will not support" any bill "that reduces freedom of expression, increases cybersecurity risk, or undermines the dynamic, innovative global Internet."

Still don't get what the antipiracy bills could accomplish? Check out this recent article from the Electronic Frontier Foundation (EFF) outlining the problems. Or watch the video below.

SOPA has been delayed for now, but it's definitely not out of the pipeline. And PIPA is still alive, with a Senate vote scheduled for next Tuesday, January 24th. So, how can you join the fight against these internet-killing bills?

Today's Strike: What You Can Do

Over 12,000 websites are showing their hatred for these antipiracy bills today. Not all are going dark. But like mentioned before, Wikipedia, Reddit, BoingBoing, and others will be going completely black today. Google is even supporting it by blacking out their logo with a link that sends you to this page where you can sign the petition. 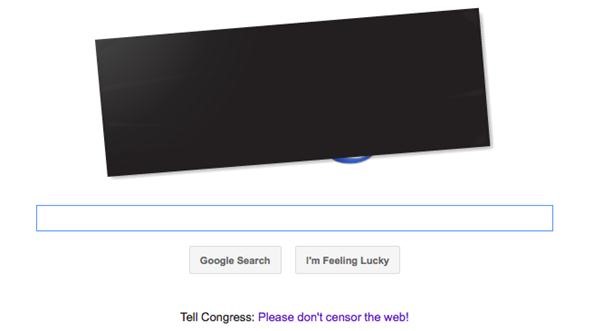 But having a bunch of websites go dark for a day isn't the only way to grab the attention of Congress. Every U.S. Citizen who uses the internet should participate in today's events. And that means emailing and/or calling your Representatives! The best chance of stopping SOPA and PIPA is while the Senate is in recess, before the January 24th vote.

To contact your Congressman, you can find them directly on their respective sites below.

Other ways to find your Congressmen.

But what exactly do you say to them? If you need help with the right words, there are sites out there that streamline the process for you.

Thank you for making a lengthy article on this for WHT. It's invaluable.

Have a look at this, it's a article clarifying exactly what sopa consists of.
http://gizmodo.com/5877000/what-is-sopa

just to clarify, my intention is not to redirect people from your article, just thought you might want to include some of the info in my link for your own article? People do not seem to be aware of how severe this is...

That's perfectly fine. I think more information is always better, especially in this case. Nobody should read only one article on this. They should read all they can until they understand. And they should read the bills themselves. Here's the links for the two bills at the Library of Congress: H.R. 3261 (SOPA) and S. 968 (PIPA).

How can I join or sign the petition while being a citizen in Berlin,Germany.

You can sign one of the petitions above or you can see if a bill like SOPA and PIPA is being voted on in your country's government.

Yeah, you might be able to sign any of those petitions above, as Matthew stated. If not, I think this one is specifically for people outside of the U.S.