When your computer first connects to a nework, it sends out a request on the network to lease an IP from the router. The router then leases your computer an unused IP address, which is used as a unique routing address for sending traffic that is meant for you, to you. As everything tends to, this method has its flaws.

When you're on a network, local attackers can perform what is called a man-in-the-middle attack. When performing the attack, it makes it possible to sniff traffic and intercept unencrypted data, like passwords or email messages. So if you are one of the many people who do not use any form of cryptographic protocol when you browse public internet, your data is open to analysis, among other things. An attack can succeed only when the attacker can impersonate each endpoint to the satisfaction of the other—it is an attack on mutual authentication. Most cryptographic protocols include some form of endpoint authentication specifically to prevent MITM attacks. For example, SSL authenticates the server using a mutually trusted certification authority.

To perform this locally, we need to spoof ourselves to look like our router and start requesting traffic from another computer on our network. In order to trick another computer on our network into sending their traffic to ours, we need to ARP poison. This will make the target computer believe we are the default gateway and that it should be sending its traffic through us. After, we route the traffic to the actual default gateway and the gateway will send traffic back that we can forward to the victim. Everything appears to be normal and working on both ends.

ARP or Address Resolution Protocol is a method of letting the network map out IPs rather than giving each computer a table of the mapping. It is vulnerable to poisoning because there is no method of checking the authenticity of ARP replies built-in to the protocol. Thus, replies can be spoofed from other addresses on the network.

Text in bold means it is a terminal.

We need to gather all of our tools needed to demonstrate this technique on ourselves.

Obtain the following packages from your repository:

To Install the packages:

When the target computer sends enecrypted data across the network (non-HTTPS websites), ettercap will see it and dump the packets into the file "cap" on the Desktop. Examine the packets with a hex editor. Any unencrypted information will be displayed in hexadecimal, which is essentially an easy way to convery binary digits into hexadecimal, and hexadecimal to ASCII, which is readable to normal humans. I used wxHexEditor. As you can see, the "hidden" data can be seen in plain text on the right side when opened. 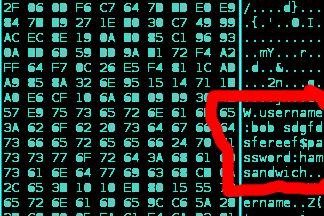 It can happen easily, but can also be thwarted in a pinch using Tor as an encrypted connection to the internet.

If you have any questions, please consult with users of the IRC channel, they are the Null Byte Sages. Please, follow me on Twitter if you like reading and want the latest articles as they come out.

Hmmm. What does it mean by [interface] ? Does it mean like, the card you have on moniter mode?

how to get encrypted data..
how could i see encrypted credentials, because most of the websites are https.

does this require two wireless cards

so, just a question.
can i use arp poisoning in a wireless lan?
precisely, i have connected my pc to the router wireless.
i obtain always "couldn't arp for host ..." error.
thanks

if i set my wlan1 card in monitor mode, arpspoof replies with "unknown physical layer type" error.
else if it replies with "could't arp for host".

sudo ifconfig wlan0
doesn't seem to work, it gives me:
wlan0 ERROR: while getting interface flags: No such device
thanks

jamie b 2 years ago

Tinkering with MITM on my own network yielded some interesting results. Using WEBSPLOIT and URLSNARF resulted in a successful attack. I then employed DRIFTNET and again I was successful in gathering information from my target computer. Yet employing WEBSPY and DSNIFF I was unable to harvest any data. I am wondering if these two application have become redundant ?