Another great Community Byte in the bag! This week was really cool, especially with programming going on twice a week. We transitioned to the new times very smoothly with no one left behind, from what I can tell.

Friday's mission was to accomplish solving HackThisSite, basic mission 6, which required us to do a bit of reverse encryption. This requires a small amount of deductive reasoning, and logic. If you think outside-the-box, you can come up with a nice simple solution to a potentially complex problem.

These missions are for everyone here, and you can join at any time. Your experience level doesn't matter.HackThisSite is a free, legal and safe practice ground for aspiring hackers wanting to test their knowledge on something real. We have full permission to exploit their servers, and we even get point rewards for it. This week's mission on HackThisSite was to reverse the encryption algorithm thrown at us by analyzing numbers that we run through the algorithm ourselves.

At the missions start, we are presented with a nice greeting.
"Network Security Sam has encrypted his password. The encryption system is publically available and can be accessed with this form:"

Following this, we are presented with a form to submit a custom number to be passed through the algorithm. 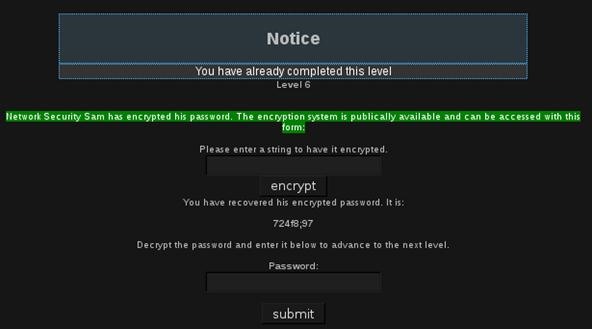 Now, if you sit and think for a minute, logic tells you that you should pass a single, repeated number so we can see exactly how it manipulates the number. Also, if you count how many characters the example has, it has 8. This means that we should also use 8 in your example number. I put in "11111111" as my number.

It's pretty easy to see the pattern.

To solve this puzzle, we simply take a look at an ASCII chart, and reverse the numbers by going up the chart by the value added to the number in the algorithm. For example, the first slot remains 7, the second is 4. Can you tell me the rest? The rest of the people who attended can tell me!

Get Involved on Null Byte!