So you want to learn the basics of the fantastic language Java, but you don't want to search the Inter-webs looking for a great tutorial. Well you came to the right place, now may I present to you JAVA.

An IDE is near necessary for you to code in any language effectively. I prefer the Eclipse Classic Platform IDE. If you would like to download Eclipse, click here. There are tons of other IDE / SDKs available like Netbeans but for the sake of simplicity I will just use Eclipse.

Okay, now that you have JDK and Eclipse or an IDE of your choosing, lets get started.

Okay, open up Eclipse and if this is your first time you should get something like this, don't worry just hit "OK". 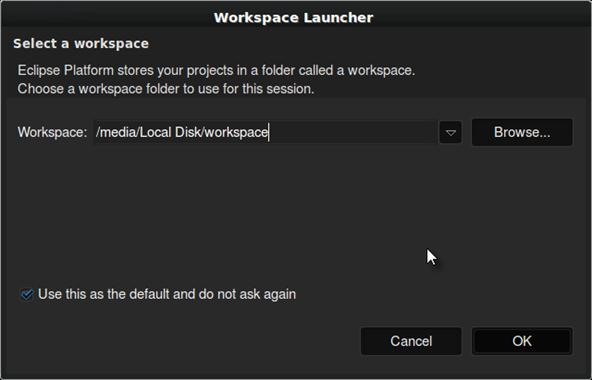 Now we are going to go to File>New>Java Project, then for project name lets call it "HelloWorld". 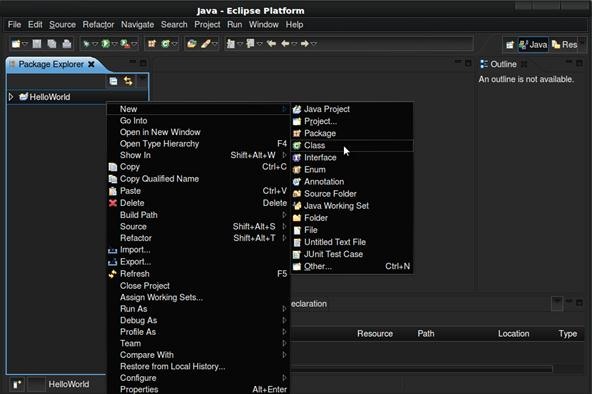 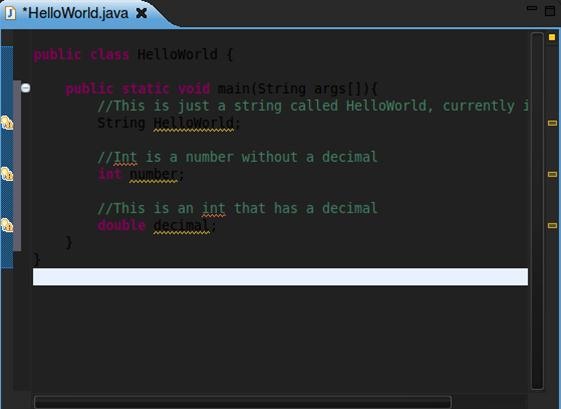 The yellow underline just means that the object hasn't been defined yet, but we are going to do that now, so don't worry, if you get a red line that means you typed something wrong. If you get a red line and don't know why you might want to look at my code and see if you put in the ';' after each line as that is needed to tell Java that line is done, this is the end to most of all Java code.

Note: public static void main(String args[]){ is needed for every class that is going to be executed. The "//" are comments like how "#" is in other languages it just tells the compiler that that line or set of lines is nothing important and not needed.

Step 2 Define the objects and output them to the Console

Okay now that is out of the way we are going to do the following,

Okay, now if you look at the code that follows what do you notice? You notice that I added some fancy comments and that I don't have the word int, String, or double. And you notice that the console tab has a something in it. 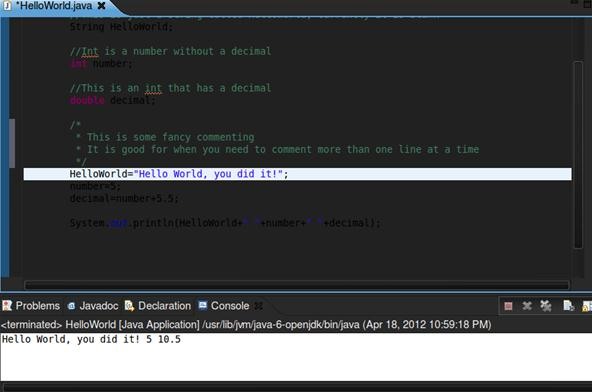 So what this code does it tells Java that HelloWorld means "Hello World, you did it!" in it and the number means '5' and decimal is number+ '5.5'.

The line of code at the bottom that says System.out.println(HelloWorld+" "+number+" "+decimal); tells Java, "Hey guess what we are going to say something to the console. We are going to say what ever this HelloWorld object means a ' ' what number means another ' ' and what decimal means." As it does that it prints it down in the Console so we all can read it.

What are we going to do now? Well we are going to: 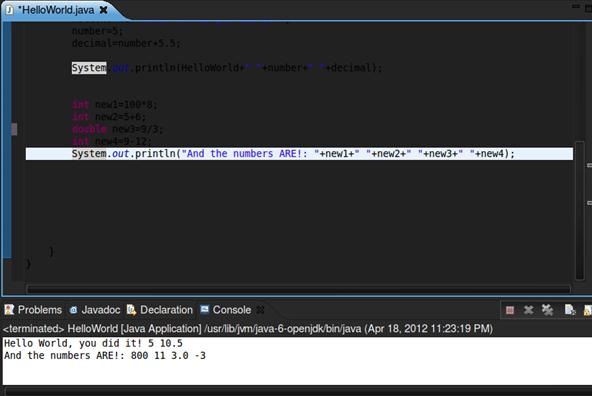 Whats new in this code? Well here you can see that you can define an object without having to do it on another line. You also see that you can put normal strings of text into a print statement without needed a String.

That's all for now on this, if you liked this and would like more please leave a comment at the bottom and if you are wondering why my Eclipse looks darker it is because Eclipse uses the GTK interface. Well I hope this helped someone learn the basics of Java and some of Eclipse. Play around with this code for a while and see what you can do.

Raw Source Code in-case it is hard to read the code: http://pastebin.com/ZV6Lnafn

Thanks, I may need to change my GTK theme when I do the next one.

Yeah, that part is a little hard to read. Otherwise solid.

Yay, I hope a lot of people read your tutorial because I write lots of articles using JAVA and I think that might be a barrier to a good portion of people, thanks! As a suggestion, I like it when there is an actual .java file that I can download and import into eclipse for experimentation. When I learned JAVA I found that experimentation was extremely important because it helps you remember it better and be more certain about what was really happening since you can alter it and see for yourself what happens.

No prob, I will prob put them as .java's in the next few, I plan on doing the next one sometime soon been busy finishing my game for comp sci class. Its a rouge like in java kinda like frouge game.

Oh, you did upload it to copy and paste! haha Although, I do prefer importing because sometimes I have several classes, in this case that would be ok though and perhaps slightly simpler for newbies...

http://www.codecademy.com this is an amazing link! its free interactive java courses that you take online. you can sign up for a free account to track progress and earn achievements. Also the webpage give you an interactive command prompt so you dont need to download anything if your just looking around!

Thanks Terminal, that's a really awesome site, I am going to add it to my blog! If I am not mistaken it is actually teaching JavaScript, not JAVA (they are fairly different). Still awesome though!

I remember trying to use this site a few months ago when I was trying to learn JS. As Mr. Newsome pointed out is Javascript and they are both different one of the main differences is that JavaScript is mainly used in websites and all everything that happens is run on your computer when using that script thats why there are addons like noscript so those bits of code can't run if you don't trust the website.